From the shore’s remove, the motion of the vessel and her crew appears almost balletic. The sleek shell skims across the racecourse swiftly, elegantly, the crisp whoosh of eight oar blades flashing through the water in perfect parallel, the swing of eight torsos in metronomic sync.

Except for a ninth figure, smaller than the rest, at the stern of the boat. He sits hunched over the gunwales, lurching forward and aft with each powerful pull of the oars. His gaze is alert, like a bird’s, darting between his cockpit computer, the linear engine of bodies and blades before him, the movements of the competition off to starboard and port. His sharp, staccato commands pierce the rising roar of the crowd lining the Montlake Cut. Exhorting his charges toward the finish. Asking for more.

This is Stuart Sim, (BA 2017), coxswain of UW varsity men’s eight. He is a master of this position that is unique in sport. The brain behind the brawn of the oarsmen. Navigator, strategist, analyst, communicator, motivator, coach and commander. All together. All the time.

“A lot of people undervalue coxswains,” says men’s head Michael Callahan. “I almost do the opposite. They have to articulate strategy and tactics, and get people to execute them. They have to analyze and adjust on the fly. But most of all, they have to unify the crew, get everyone moving together. That’s what (Washington’s legendary master boat-builder) George Pocock called swing. It’s the story of rowing.”

By any measure, Sim is an exceptional steward of swing. A third-generation coxswain of the Australian national team, he has already steered the Husky varsity eight to national titles in 2014 and 2015. After taking last year off to captain the Aussie men’s eight in the run-up to the Rio Olympics (narrowly missing the seventh and final spot to the Americans), he returned for his senior year, bringing such a deep well of experience, skill and athletic intelligence to the Huskies that Callahan considers him another coach in the boathouse.

But Sim had other unfinished business at the UW. He returned to Washington to complete his degree in finance at the Foster School of Business, where he’s a fixture on the dean’s list.

This particular dual identity places Sim along a proud lineage of transcendent Washington coxswains who have been intellectually powered by Foster. Five are enshrined in the Husky Hall of Fame. The first—and most famous—was Bobby Moch (BA 1936), the coxswain who led “The Boys in the Boat” to glory at the 1936 Olympics. Raised in the foggy logging town of Montesano and diminished by a botched appendectomy when he was a kid, Moch earned his seat in the Husky varsity eight with unrivaled wit and unyielding tenacity. His legendary underdogs won the Intercollegiate Rowing Association national championship in a late charge and then overcame impossible odds to claim the gold medal—in another breathtaking comeback—before 75,000 roaring partisans and a disapproving Adolph Hitler at the Berlin Games.

“Bob got some things out of the crew,” recalled bowman Roger Morris, “that I didn’t think were there.”
After razor-thin victory at the IRAs, James Burchard of the World-Telegram wrote that “it was a story of psychology, pure nerve, and rowing intelligence. Moch’s noodle was the best oar in the Washington boat.” Vic Fomo (BA 1942) embodied the American Dream at a time when it was needed most. The son of Italian immigrants grew up in Anacortes during the Great Depression and found a future at the UW. On the water, he became a cagy coxswain who led three national championship boats and never lost a race in four years (a singular feat in the sport).

Fomo’s 1940 crew was selected to represent the USA in the Helsinki Olympics before they were cancelled by World War II. “We cried like hell,” he recalled. “We all had confidence we were going to win.”
The next year, his Hall of Fame varsity eight rowed away with the national championship. “As great a crew as I’ve ever had,” remarked legendary coach Al Ulbrickson. “I’ve never seen a gang with such sockeroo.”

After graduating from the UW, Fomo served as a navigator in the Army Air Corps during WWII and the Korean War, then put his business degree to work in sales for Dictaphone before a successful run of commercial real estate development. Al Morgan (BA 1950) served in the Navy in the South Pacific during WWII before studying business at the UW on the GI Bill. His wartime leadership translated famously into the rowing shell, where the Seattle native coxed the Husky varsity four to a gold medal at the 1948 London Olympics.

His was the only UW crew to be coached by the master boat-builder Pocock, who commented, after that come-from-behind victory, that he had “never before or since seen a four pull as we did in the last 15 strokes. They were actually lifting the bow out of the water.”

“I attribute our win completely to Al Morgan,” remarked oarsman Gordon Giovanelli. “A coxswain has to steer a straight course, coach the crew and cheerlead. Al was the best I ever had. He won the Olympics for us.”

But Morgan wasn’t finished. The four-year letter-winner delivered another national title in the Husky varsity eight in 1950 before graduating to a career managing sales of Gestetner duplicating machines.

John Bisset (BA 1958) had never been in a rowing shell when some fraternity brothers convinced him to turn out as a coxswain his freshman year at the UW. Maybe it was his experience as Roosevelt High School’s “Yell King” or the slightness of his frame.

“I remember thinking, what a thankless job,” he says.

But Bisset became a tremendous coxswain for the Huskies, leading the 1958 varsity eight to the Henley Royal Regatta in England after an undefeated season. They fell hard to the powerful world champions from Leningrad. But two weeks later, they delivered a stunning and symbolic victory at the rematch in Moscow, winning the first athletic contest between the USA and USSR on Soviet soil—or water—since the start of the Cold War.

After graduating from Foster, Bisset became an assistant coach at the UW and head coach at UCLA before coming home to become executive director of the UW Alumni Association. Later, he served as president of Alumni Holidays, the Chicago-based pioneer in university-affiliated group travel.

Row around the world 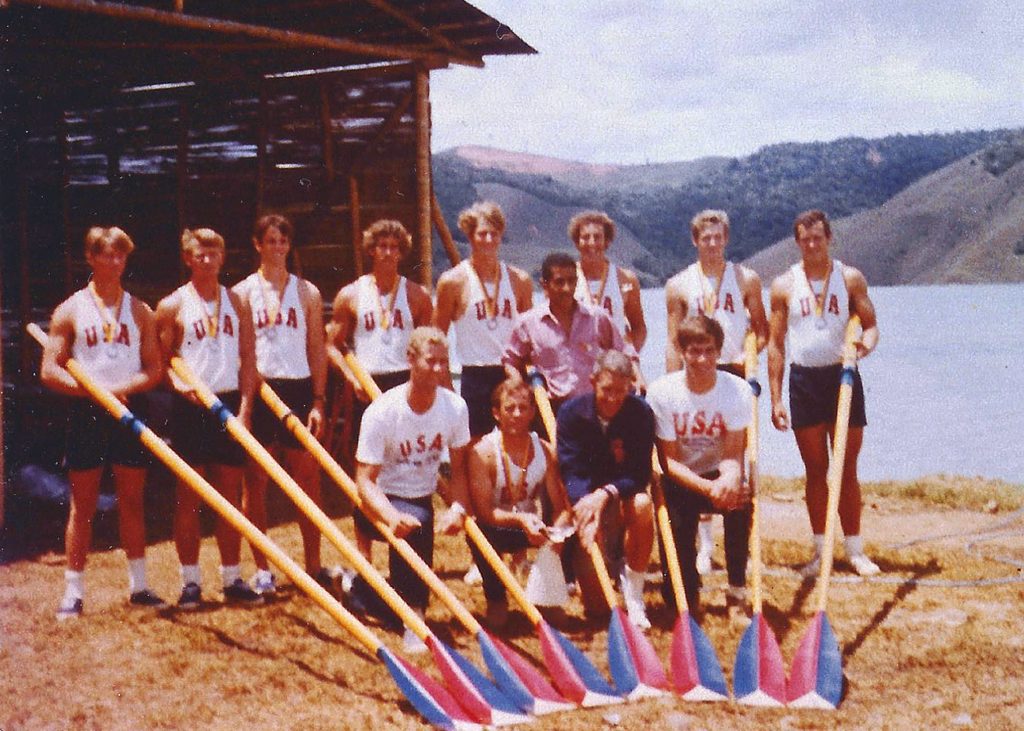 Polio robbed Dwight Phillips (BA 1971) of his promising athletic prowess. But he found a fitting competitive outlet in the coxswain seat at the UW, leading a major renaissance in Husky Rowing. In 1970, his junior varsity eight contributed to the school’s first IRA national title in 20 years, then represented the USA as a four in that year’s World Rowing Championships in Canada.

In 1971, Phillips coxed the national champion Husky varsity eight that was selected to represent the USA at the Pan American Games in Colombia, taking the silver medal. And even after graduation, his Husky pair-with-coxswain competed in the 1973 World Championships in Russia.

“We had some wonderful athletes who I, jokingly, say gave me a ride around the world,” says Phillips, who was elected team captain his senior season.

After a stint in coaching, he embarked on a long career in banking. He serves as senior vice president of Columbia Bank today.

Why has the UW produced so many masters of boat and of business? Eric Cohen (BA 1983) is in a better position to answer that question than anyone. While studying operations management at Foster, he coxed the Husky varsity eight to a pair of Pac-10 titles before a career in marketing gave way to his role as chief historian of the storied Washington program (his definitive research can be found at WashingtonRowing.com/history/).

Through this work, he has come to know these Hall of Famers well. And he sees the connection between rowing and business as more than just metaphor.

“There’s a common bond between all of us who have experienced the uniqueness of the coxswain position,” Cohen says. “It’s the ultimate multitasking management job. You’re doing five different things at the same time, all of the time. Steering, coaching, executing the training or race plan, analyzing and motivating. Getting the most out of your team. All to maximize the efficiency of the boat.

The parallels are clear, as well, to Erin O’Connell (BA 1996), the senior associate athletic director at the UW who won two Pac-10 championships during her days as a coxswain for the Husky women’s rowing team.

“A coxswain’s ultimate goal is to get eight strong personalities to perform as a team to the best of their ability. To get the best out of everybody,” says, O’Connell, who manages a portfolio of 13 sports, events, facilities, operations and IT. “The rowing shell is really a microcosm of any type or size of organization.” If Callahan is the CEO of this competitive floating enterprise called Washington Men’s Rowing, Sim is his chief operating officer in the boat. Maybe chief technology officer, too.

The coxswain’s job has evolved alongside the tech at his disposal, from the stopwatch-and-megaphone days to the modern rigger-mounted power sensors and biometric monitors delivering real-time data to a dashboard computer and a communication network that runs the length of the shell. In addition to feeling the boat, a cox needs to be a crack analyst of data.

“That’s the modern world,” says Callahan. “Just as in business, we’re making that jump of turning data into intelligence. So I look for coxswains who can command authority and are situationally aware, but who also are quantitative, detail-oriented and articulate. Above all, I recruit intellect. There’s a lot to process and then simplify so that everyone has one direction.”

He says that no collegiate coxswain manages instinct and intellect—and what it takes to meld eight strong-willed individuals into a high-performance machine—better than Sim.

In his senior season, he has led the men’s varsity eight to gold at the prestigious Head of the Charles and the Pac-12 Championships and a second-place finish in the grand final of the IRA national championships, their late charge to the line falling short by the narrowest of margins: 69 thousandths of a second. If denied a third national title, it was enough to secure the school’s 14th Ten Eyck Trophy for the overall points victory.

After graduation, Sim plans to retire from competitive rowing and embark on a career in entrepreneurial finance. He packs an impressive resume, even beyond internships at Uber and Ignition Partners.
“I tell employers that my job as a coxswain is synthesizing data to make decisions that add value,” he says. “In rowing and in business, those who turn information into better decisions win the day.”

That’s really what this great pantheon of Foster-educated Husky Hall of Fame coxswains has always done, from Moch on up the line. It is how an indelible tradition is built. “We have a saying that the ‘W’ is bigger than you or I,” Sim says. “You do this for more than yourself.”

And when he goes, another able coxswain will step into his seat at the helm of the formidable Husky varsity men’s eight.